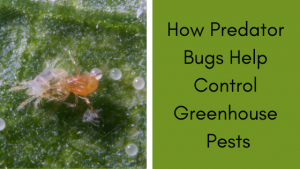 We all remember the pest control commercials for Raid. Common household bugs flee from a chemical cloud, shouting the chemical brand name, “Raaaaaid!” This type of advertising makes it seem that the best way to get rid of any unwanted pests is to douse them in poison.

And in the average greenhouse environment, most people are using chemicals to kill pests. However, pests can build up a resistance to these chemicals, leaving a residual population of bad bugs that can reproduce and thrive in their mutated state. Not to mention, chemicals that are toxic to insects can also be toxic to people.

If this sounds problematic to you, predator bugs are a good option to consider. These helpful creatures are an excellent addition to your line up for battling pests. And they reduce the toxic load on your greenhouse!

Predator bugs work really well when you have low pest populations. They won’t reach superhero status, eradicating every baddie in their tracks. However, they make a great clean-up crew.

What that means is that if you have a major pest outbreak, first you have to spray it to get it knocked down. Then you can use predator bugs to keep things cleaned up afterward. They’ll work like the mallet of a whack-a-mole game, squashing any resurgence of the pest population.

What we have found over the past couple of years is that a bug called Phytoseiulus persimilis gives you really good control over the two-spotted spider mite. Because the persimilis is a mite that eats mites, it can cause a bit of confusion with customers.

You may get a few calls about “bugs on my plants.” But the benefits of using persimilis outweigh the cost of the time it takes to educate your customers. Once they know how to figure out which one is which, it will change your whole conversation. Your customers will be happy that the persimilis hitched a ride. They’ll have gotten a bonus.

Instead of saying, “I’m sorry,” you get to say “You’re welcome.” 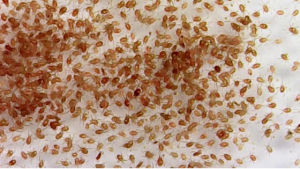 Phytoseiulus persimilis as seen under a microscope.

Top of The Food Chain

Predator bugs aren’t exactly on the top of the food chain. Because, well… they’re also bugs! From what we have seen, using predator bugs doesn’t give you complete control- they just help keep the numbers down.

The reason for this is that some of the other predator bugs go into diapause (dormancy). And they can’t be fighting the bad guys when they are sleeping on the job! So a bug that works well in summer time may not be effective in the winter.

Once you’ve introduced predator bugs to your greenhouse, you can’t use certain chemicals anymore. Some chemicals are more harmful to bad bugs than they are to predator bugs. However, others are supposed to completely wipe out all bugs- which will eliminate your predator population as well.

In general, biologicals are less harmful to predator bugs than regular insecticides. But you should always double check before spraying.

You’ll need to keep this in mind all the time, but especially when you do your first release. If you’ve just used a miticide to wipe out a big infestation, you can’t release your predator bugs before the miticide is gone. But, you do have to release them soon enough that the bad bug population doesn’t explode again before the good guys arrive. It takes attention to timing!

If you’re wondering where we get our predator bugs, Bioline AgroSciences offers a wide portfolio of Biological control products that can be used as a first line of defense in your Integrated Crop Management (ICM) program.

We just wanted to remind you that we are a wholesale starter plant company that sells to businesses, schools, clubs, and other non-profits. State law dictates that you need to be tax exempt to order from us.